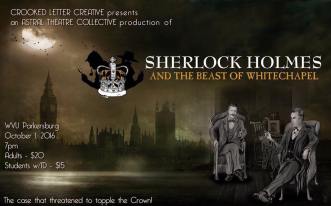 “Sherlock Holmes and the Beast of Whitechapel” (2016)

Based on the Public Domain Works of Sir Arthur Conan Doyle

It is  1895.  Four years after the famous dual at the Reichenbach Falls with Professor Moriarty, Sherlock Holmes has returned to his Baker Street lodgings with Dr. John H. Watson to resume his life of fighting crime.  He soon finds himself embroiled within a case of intrigue that could truly bring the foundations of the British Empire to its knees. Along the way, Holmes encounters one of his greatest antagonists , Irene Adler, as well as a new adversary worthy of his attention. Will Holmes save the day? 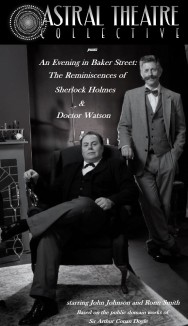 A two-man show based on the public domain stories of Sir Arthur Conan Doyle.

Nothing more than two friends reminiscing.  Join Sherlock Holmes and Doctor Watson as they discuss the great adventures they have shared, all while sitting by the fire at Baker Street. 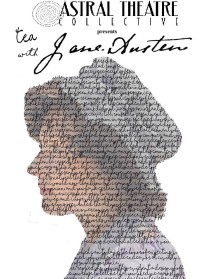 Written by and starring Rachel Sanford.  An intimate visit with one of English Literature’s greatest authors.  She shares passages from her novels as well as stories of her life beyond the printed page.

By Adam Stover and John Johnson

Based on the story by J. Sheridan LeFanu

Eastern Europe, sometime in the past – A family finds themselves caring for a stranger.  She is young, she is beautiful.  Through her charms she befriends the daughter of the landowner.  But are they ready for the secret this stranger holds?  A tale of Gothic horror and suspense, this story was an inspiration for Bram Stoker’s “Dracula.” 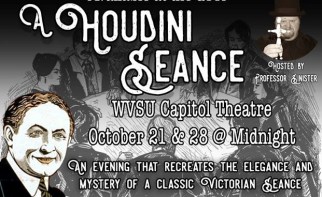 A unique event sharing both magic and history with the audience, including the reenactment of a classic seance in honor of Harry Houdini.

Script by John Johnson, from an incident in the Conan Doyle story “A Scandal in Bohemia.”

(Press below to hear and see the performance.)

The Adventure of the Christmas Carol

A priceless draft of “A Christmas Carol” in the author’s own hand goes missing, and it is up to Sherlock Holmes and Doctor Watson to find it. 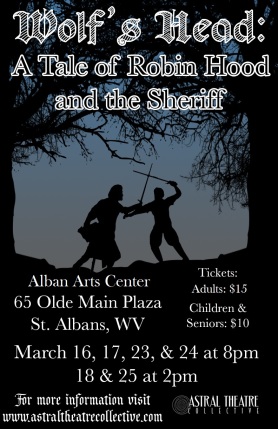 The Great Avenger of Injustice is back, along with his Merry Men of Sherwood Forest in this swashbuckling story of adventure, betrayal, intrigue, and unlikely partnerships.  It is Robin Hood and the Sheriff of Nottingham as you have never seen them before.  It is rollicking frolic through the stories of long ago!

This play was nominated for “Best Play of 2018” by BroadwayWorld.com!

Since before she sailed, R.M.S. Titanic has captivated the imaginations of those hearing her name.  In this family-friendly performance by Astral Theatre Collective, the R.M.S. Titanic sails out from the pages of history to bring the audience a dramatic presentation from three of the roughly 2200 who were aboard her on her ill-fated maiden voyage.  Hear their stories, based on their own words and eye-witness accounts and enhanced through the use of authentic historical items and reproductions.  See what the 1997 blockbuster film missed in this dramatic learning experience. 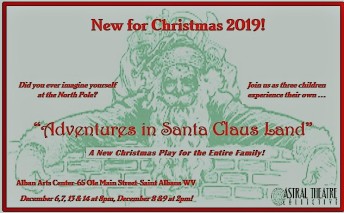 Join Lily, Anna, and Jack as they travel through a dreamland in search of Santa Claus and his workshop.  Along the way, meet the magical creatures of the forest, the North Pole, and the Christmas Season.  Beware!  Krampus is on the loose!  Will these three children be able to help Santa Claus save Christmas?